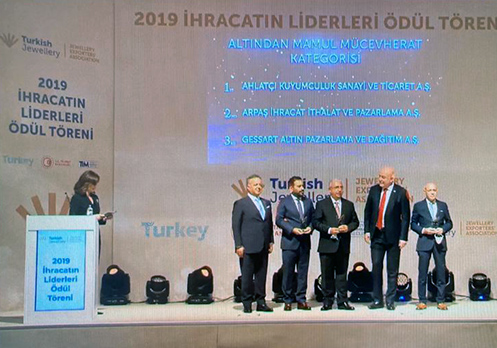 In the award ceremony, where Trade Minister Ruhsar Pekcan also attended via teleconference, the companies at the top of jewelry exports were given their awards. The bending strength become one of the most important actors of Turkey's economy not only the jewelry sector in recent years with leap realized Jewelry, was the champion of Turkey's gold exports.

Turkey held the Exporters Assembly and Commerce Minister in Ruhsar Pekcan to participate in the teleconference, "Jewelery Export of Leaders 'at the awards ceremony, Turkey's largest jewelry exporters, he took TIM President Ismail Shot and Jewelery Exporters' Association Chairman Mustafa awards from Kamari's hand. Not only the jewelry industry has become one of the most important actors of Turkey's economy Jewelery bending strength," Turkey's largest gold exporter 'award. Ahlatcı Jewelery, which alone carries out a significant part of the total exports of its sector, has left its mark on the peak of exports this year as well.

Ahmet Ahlatcı, Chairman of the Board of Directors of Ahlatcı Holding, who answered the questions of the press members in the organization organized within the framework of the Covid-19 measures;

At the top with exports of 1.3 billion dollars

As Ahlatcı Kuyumculuk, we continue to grow both in domestic and foreign markets. We are the 1.3 billion dollars in exports, Turkey's largest gold exporter we made last year. I would like to thank all our colleagues who contributed to this success.

Çorum has become the base of jewelry exports

Just a few years ago, we launched our giant-scale gold factory, which has the world's most advanced technology in its field. Gold processed in Çorum, in the heart of Anatolia, now adorns the elegance of women all over the world. This is also a source of pride for us. With the numbers we have put forward, we can now easily say that; It has become "the base of jewelry exports in Çorum".

Export is more important than ever

The written matter by the whole world, not because Kovid-19 outbreak in Turkey is being very difficult time. There is a serious contraction in almost every market in which we operate. However, as a requirement of the Ahlatci corporate culture, we see these days as a period where "opportunities will be created" rather than "excuses". And we continue our work in this direction. We will continue to grow despite all these negativities. We are aware of the importance of exports for our country's economy. It is another source of pride for us to contribute to our country's economy with these works.

We aim for the top 10 in the world

The understanding of continuous development and progress is in our company DNA. We are one of the most important players in the domestic market. We have demonstrated how successful we are in foreign markets with our performance. Until this time, we have achieved our goals within the framework of the vision and strategy we put forward in our organization. In the next period, we aim to be among the 10 largest companies in the world in this field. Our growth plans also include acquisitions or company marriages.